No Joan For You! Oscars Snub Joan Rivers. Yellen Testifies.

Leave a comment Posted by Phil Grossfield on February 23, 2015

No Joan For You!  Oscars Snub Joan Rivers.  Sometimes I just hated her but she almost always made me laugh.  In fact, I’d find myself laughing and then feel guilty that I was laughing and then blame her for my laughing…does that sound about right?  That’s the thing about Joan Rivers…she was tasteless…purposely. 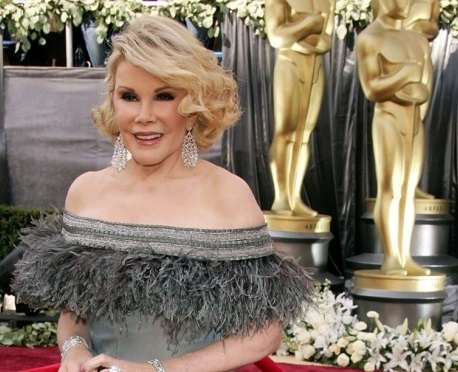 My guess is that many movie stars hated her guts for all the crude, obnoxious, disgusting, abusive, abhorrent, disgraceful, yet mostly funny jokes made at their expense over her career (sometimes there just aren’t enough words in the thesaurus).  Their ultimate revenge…snub her at the Oscars by not acknowledging her in the In Memorium portion of the show.  Mission accomplished.

Some will say she wasn’t a movie star and didn’t deserve her picture on the In Memorium screen.  But that’s a lousy argument.  Let’s face it, Joan Rivers was as much a part of the Oscars as anyone in the industry.  Over the years she was consistently there…a staple to the event.  She coined the question, “so what are you wearing?” making the Oscars as much a fashion show as an awards show. Whatever you thought of her, she deserved to be remembered on the big screen and anything less was a snub, make no mistake about it.

Like I said, sometimes I despised her, but she made me laugh, and she’d take that over me liking her any day.  She had an endless list of quotes to leave behind…but here are just a few…

The 30-year Fannie Mae bond is up +19bps since Friday’s close.  Generally a lender’s pricing improves when the bond is being bought.

Could this be our week?!  With a week full of economic reports, falling oil prices, and just two weeks away from a new Jobs Report, we might see some positive momentum to get us closer to where we were at the end of January.

But the big news this week is Federal Reserve chair Janet Yellen testifies in front of the U.S. Senate on Tuesday and the House on Wednesday.  More than anything this testimony will influence traders one way or the other because she will have to answer questions about when to raise interest rates.  Most traders consider this the biggest news because if the Fed times the rate hike incorrectly, it could send the U/S. economy into another depression-like period.  Note the Fed hasn’t done a rate hike since 2006.