Clinton May Have Lost Popular Vote

Leave a comment Posted by Phil Grossfield on November 28, 2016
Clinton May Have Lost Popular Vote. I hear a lot about how Clinton won the popular vote by 2,000,000 and how our system is screwed up with the electoral process. It’s been discussed in my circles ad nauseam and I make the argument that’s it’s irrelevant.  Let me explain. 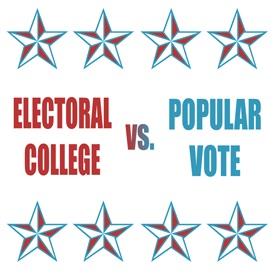 Popular Vote versus Electoral Vote – Explained. The popular vote is simply the number of Americans voting for a particular candidate. But the electoral vote is much more complicated. It’s actually the House members of each state that cast the actual votes based on how the citizens of that state vote. Each state has 2 U.S. Senators and a number of House of Representatives based on the state’s population. For example, California has 2 Senators and 53 House members for a total of 55 votes because its population is huge compared to Arizona who has 2 senators and 7 House members for a total of 9. The idea was to balance the voting power to the smaller states.California has about 40 million people and Arizona has about 7 million. Each member of the House represents about 725,000 people in California (40m/55) whereas each member of the House in Arizona represents about 775,000 (7m/9). Many think this it’s unfair that the candidate that won the popular vote should get trumped by the winner of the electoral vote (pun intended).
Why It’s Irrelevant.  It just doesn’t matter – trust me! Look, if we used a popular vote instead of the electoral vote everything would be different and there’s no way to know how the results would change. First, the number of people voting would change dramatically. Many people in California didn’t vote because they felt it was a waste of time since it was a forgone conclusion that the state would go democratic and all 55 electoral votes would go to Clinton. Same thing in Arizona…I know a lot of people that simply didn’t vote because they didn’t feel there was a chance in hell the state would vote anything other than republican and all 9 of its electoral votes would go to Trump. Since all the electoral votes go to one or the other, people stayed home. I read that nearly 100 million didn’t even vote!

Many argue that a much higher percentage of people in the country would vote if we moved away from the electoral process.
Second, and just as important, the strategies employed by the candidates would have been strikingly different. That is, Trump and Clinton would have strategized and executed a plan that looked nothing like their actual campaigns over the last 500 days. Using my example above, Trump would have undoubtedly spent more time in California and Clinton would have spent more time in Arizona. But EVERYTHING would be different. It’s like saying we’re going to change the rules of baseball where each stolen base is worth 1 run…recruiting would be greatly skewed towards fast base runners and the strategy behind every game plan would be completely different…coaches would be more interested in getting singles by fast base runners to score more runs and catchers with strong arms would be in higher demand.

The point is, if we used the popular vote, the overall strategies of the campaigns, where they visited, the speeches, the advertisements, everything would be different. Clinton may have lost by 20 million or won by 50 million…there’s no way to know. So when anyone makes an argument that Trump would have lost or Clinton should have won, it’s nonsense. Unless we actually change the system, we’ll never know the true impact to the election results.

Why Bonds Fell – The Assumptions & Uncertainty Of Trumpenomics

Leave a comment Posted by Phil Grossfield on November 21, 2016

WHY DID BONDS FALL?  THE ASSUMPTIONS & UNCERTAINTY OF TRUMPENOMICS.  Let me see if I can give you some talking points with your clients on why bonds fell so dramatically since the election results were announced.  The main concern is rising inflation.  Bonds hate inflation so when it’s on the rise traders will sell-off bonds. The truth is, nobody really knows what Trump will do except Trump himself, and I don’t think he really has a definitive plan at this point. I believe he approaches these sorts of issues with the mentality that whatever it is he’ll make sure it’s fixed…that he’ll figure it out…just like he figures out how to fix issues within his businesses. There is no room in his mind for failure…he’ll just get it done. But based on his comments made during the campaign, we expect him to (1) repeal free trade agreements with other countries and (2) lower taxes while simultaneously increasing government spending for infrastructure, i.e., airports. This would undoubtedly influence an accelerated change in the Fed’s monetary policy.
FOR ALL THESE REASONS, traders sold off bonds. It took a whole year to get the bond prices high and our rates/pricing so aggressive. But because of these concerns after Trump was elected, bonds lost all the year’s gains in less than 2 weeks.  As always, this is intended to give you talking points with your borrowers. REMEMBER, borrowers are more likely to do business with you if they trust you. By understanding what’s going on, and being able to communicate the same, you instill trust. I hope all of this helps. If my explanations are unclear, or if you disagree, I would love to hear from you.