Leave a comment Posted by Phil Grossfield on October 28, 2013 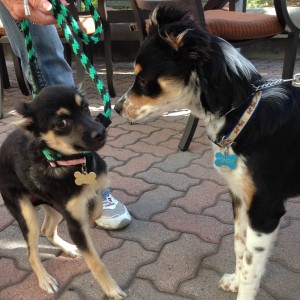 Ginger!  Pongo’s sister is up for adoption. I wanted to adopt her myself but I have a wife, 2 kids under 10, an 85-pound 9-year old dog, a 15-year old cat, and Ginger’s brother, Pongo, who is just 5-month sold. That’s enough!  I met Ginger at the Helen Woodward Animal Center HOPE Telethon. She was abused just like Pongo…see the ears? She was in worse shape than Pongo when they found the dogs in a dumpster, left for dead, but Helen Woodward Animal Center nursed her and the others back to good health. Now she just needs a home. Go adopt Pongo’s sister, Ginger. She’s just like MaryAnn, small and sweet.

Pongo is a star! We’ve been in a few articles now and on KUSi News once already…and now they asked me and Pongo to come back and do a live interview for their HOPE Telethon. The last time we were interviewed for KUSI News they completely edited me out and only used my wife’s comments. No, my feelings were definitely not hurt. But this time it was just me…nobody to bail me out. Oh, and it was LIVE TV.  Holy crap. But I think I did okay…you be the judge. The Sea World folks were there too and they all recognized Pongo right away…he’s famous! They asked for a picture so we obliged. I tried to get a picture of Pongo in Shamu’s mouth but Pongo wasn’t having any of it.

My Market Watch:   Bonds Flat – Pricing Similar to Friday.  The Fannie Mae 30-year bond is flat and there is virtually no activity. I think everyone is waiting for Wednesday when the Fed’s policy statement is released with the ADP employment numbers.

From what I read nobody is expecting any surprises from the meeting which starts tomorrow and ends Wednesday morning. Each month this year a meeting such as this would be humongous news since the Fed was considering a change to monetary policy as it pertains to Quantitative Easing. But not this month. As I’ve written recently, the government shutdown coupled with the recent economic data has curtailed any expected change in policy. Barring a monumental surprise by the Fed, things should be relatively uneventful.

For the record, I know this is a boring report…and boring is good.

Economic News
← I was on TV; Bond Trading – An Explanation MOVEMBER IS HERE! JOIN ME! →