She is NOT Invisible

She is Not Invisible.  My wife is not invisible as she suggested in her heartfelt story, but apparently many women over the age of 40 feel that way. I don’t claim to understand women despite spending nearly the last 15 years with my beautiful adventurous Travelmama wife. But I do understand this…Colleen is thoughtful to a fault and courageous in her expression. 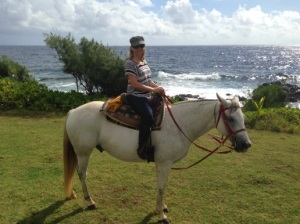 There are many stories she’s written over the years I admire, and these two are among them, even if I don’t understand why she feels the way she feels. But many obviously feel the same way…evident by the number and content of the comments. Her first story was Midlife Crisis in Maui and was followed by Finding Myself on a Horse in Hana. Here was my comment I posted to her story,

You have always been incredibly sexy and nothing has changed. I know you’re writing about how you feel, and I commend you for your bravery in that regard, but if you think you’re not sexy you’re wrong…crazy maybe…but definitely not not sexy.

Rates/pricing continue to be strong and improved, and I see no reason for that to change at the present moment. First, traders continue to buy bonds despite the Weekly Jobless Claims report coming in lower, meaning less people were claiming they are out of work. To traders a report such as this usually indicates an improved stronger economy and typically these traders would use this as a good reason to buy stocks and sell off bonds. Logically rates/pricing would worsen as a result…but not today. Bonds continue to hold their ground, no doubt because of the sustained government shutdown. Second, there are nasty storms looming in the Gulf…nasty weather has a tendency to work against stocks and indirectly in favor of bonds. For these two reasons, I expect our great rates/pricing to hold. That said, the trend or moving averages as we like to call them indicate rates have reached a high level of resistance. That is, the chances rates/pricing will continue to improve isn’t great, unless something positive happens to push them over the ceiling….

Government Shutdown Remains. It is now day 3 despite a meeting between President Obama and leaders of Congress last night. I really don’t think the President is going to back down and why should he? Obamacare is a valid law, enacted by due process. If Republican leaders don’t like it, then they should work to change it using constitutional methods, not extortion. Regardless of my opinion about the Act itself, as an attorney I am confused and even offended by our leaders’ actions.

No Jobs Report Tomorrow. Fed Meeting on Monetary Policy – QE Tapering Likely Delayed. The Jobs Report was scheduled for tomorrow but now it will not be released. Similarly, the Fed meeting this month to discuss QE tapering will likely be postponed or cancelled.

Economic News
← IMPORTANT – Impact of Shut Down I Flailed About Like A Fish; No Transcripts Required →

One response to “She is NOT Invisible”