Leave a comment Posted by Phil Grossfield on January 22, 2015

Jerks.   When someone is being a jackass, you know, a complete jerk, I often say to myself, ‘I wonder what’s going on in their world.’  Everyone has some stuff they’re dealing with and some things are more intense/stressful/painful/traumatic than others.  I’m sure you have some stuff going on in your life too
…I most certainly do.

As an operations manager I sometimes had to deal with an employee who acted out on another…some form of inappropriate behavior or uncharacteristic outburst.  I always asked them if they were okay…was there anything they wanted to tell me, ya know?  I suppose we work with some bona fide 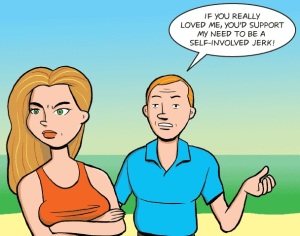 jerks in the world but most are just like you and I (assuming you don’t think I’m a jerk).

But in the end, we have a responsibility to remain professional and treat others with kindness and understanding.  After all, most of the anger we experience is just a form of Ego.  We say subconsciously, “he shouldn’t talk to me that way because I deserve better” instead of subconsciously saying, “gee, I hope everything is okay at home with this jerk.”

This is something I preach to my kids too since they often complain about how they are treated by each other or someone at school or sometimes me I suppose. It’s a difficult thing to do sometimes, but I have to remind myself often to give people the benefit of the doubt and presume they are typically kind.  That’s all I have to say about that.