Goodbye Brant – One Of Our Own 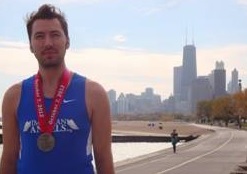 Goodbye To One Of Our Own
Brant Gniewek was a funder at Interbank…he was calm and patient with an entrepreneurial spirit. He inexplicably died just the other day at the young age of 30. Interbank is in mourning.

In 2009, the mother of Brant’s best friend died of Cancer. From that time until his untimely death he volunteered for fundraising. Brant’s legacy will be his efforts to raise money to help cover the cost of early detection. He came up with the idea to run 52 races to help 52 people. Brant ran his first-ever marathon in 2011 and another in 2012…

In December, the Windy City Times ran a story about Brant in which he was quoted,

“I have been very passionate about fighting cancer, and beating it. As I was planning my races for 2013, I came up with the idea to run one race a week for one person to help raise money for them to fight and beat cancer. After playing around with the idea, I came up with 52 for 52 to fight Cancer. The original idea was to run 52 races and raise money, but that turned into starting my own charity: 52for52.org. My goal is to raise money to help cover the cost of early detection. This means covering the cost of any type of exam, full physicals, getting information out there for people to do self-exams, and more. This can be for anyone who needs an exam, cannot afford the exam, or does not have the health insurance to cover the cost. I will be looking to partner with hospitals and clinics as the charity grows.” – Brant Gniewek

Brant had run 18 races this year alone, and already was registered for 8 others. His family and friends will now continue his organization and run races in his memory. Donate to Brant’s 52-For-52 Fight Against Cancer.  Thank you Brant for your spirit…you will be missed….

My Schedule: Available until 4p and then DONE DONE DONE!

Market Watch:  Bonds Down – PRICES REMAIN. The 30-year bond is down this morning nearly -60bps but Interbank’s pricing is unchanged from yesterday. This is a great time to lock before they issue a mid-day reprice for the worse!
Don’t Let Your Locks Expire!  Bonds Will Eventually Come Back…. Read Me

One response to “Goodbye Brant – One Of Our Own”