Leave a comment Posted by Phil Grossfield on February 10, 2015 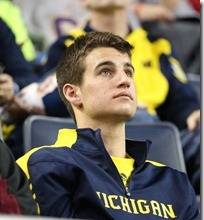 Austin Hatch – Miraculous.  I was up late last night…just couldn’t sleep. I turned on the TV and within seconds a new feature story was beginning on ESPN entitled, “Miraculous.” That word is certainly appropriate, yet inadequate to describe the story of Austin Hatch.

When Austin was boy he was in a plane crash that took his mother, sister and brother’s life…only he and his father survived. Years later Austin excelled at basketball and was ultimately recruited to the only team he wanted to play for…the college where his Mom graduated…Michigan. But then the second plane crash happened…yep…it happened again. This time his father was taken, and his step-Mom too. Austin suffered a brain injury and was in a coma for 8 weeks. But nothing would stop him… Miraculous.

Mid-March. I am scheduling appointments for mid-March. If you’d like a visit, please let me know..