Leave a comment Posted by Phil Grossfield on February 2, 2015 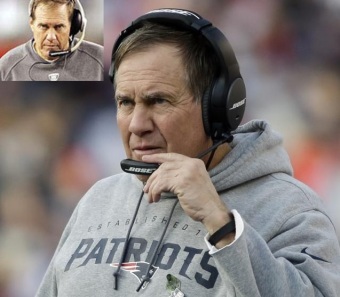 Breaking News – Belechick HexTextGate.  It is believed that Coach Bill Belechick of the New England Patriots sent a hexing text message to Coach Pete Carroll of the Seattle Seahawks just before the end of the Superbowl game last night.  The text came at a volatile moment just after the Seahawks gave the ball to running back “Beast” Marshawn Lynch who pounded his way to the 1-yard line nearly scoring the winning touchdown.  The hexing text came as Coach Carroll was determining which play to run next.  According to sources Carroll received a text from one of Belechick’s coaches upstairs in the booth at Belechick’s direction.  The contents of the text are under investigation but according to reliable sources it convinced Carroll to throw the ball despite having the most prolific running back in the NFL with 3 opportunities to drive the ball 1-yard for the go-ahead score.  Our investigation has revealed that Coach Belechick employs a private detective to discover the transgressions of each NFL coach and periodically uses the same to coerce bad decisions for the opposing team.  Whatever the contents of Belechick’s message to Carroll it was enough to befuddle and induce him to make arguably the worst goal-line call in NFL history.  Belechick denied all accusations saying “In all my years in the NFL I have never considered using a cell phone and wouldn’t know the first thing about sending word messages.”

The 30-year Fannie Mae bond is trading down -17bps this morning since Friday’s close.  Generally a lender’s pricing worsens when the bond is being sold off.  I expected a sell off this morning which is why I sent you an alert on Friday afternoon…the signs were all there.  However, PMAC’s pricing is not far from Friday’s so these rates look very strong this morning, particularly the conventional rates.

Friday is the Jobs Report which always has the power to significantly influence traders’ behavior.  As soon as I get a handle on the expectations of Friday’s report, I’ll let you know…  In the meantime, let me know if you have questions…