Leave a comment Posted by Phil Grossfield on January 28, 2015

iPhones Kill!  iPhones Kill.  You know what they say…there are two kinds of cell phone users…those who own an iPhone and those soon to own an iPhone.  Apple reported huge revenue numbers this morning.  They sold $75,000,000 in iPhones in just 3-months…wow.

I have to say, I live in an Apple universe.  I’ve been an iPhone owner since they came out and I’m loyal.  I’ve seen friends and family try other brands and they never hold up.  My wife recently switched to a droid phone made by HTC and she hates it.  Let’s face it, Apple knows what they’re doing…they make beautiful phones that work the way you expect.  Yeah, there is less customization and more common denominator functionality…I say it’s just fine with me.  If you don’t have one, I bet you will soon enough.  As Yoda would say, an iPhone soon will you own.  I’m virtually entirely Apple at this point…iPhone, iPad, iPods for the kids…all I need now is a Macbook Air.  To that end, I need some loans people!

The 30-year Fannie Mae bond was trading up +16bps this morning but then dropped quickly to just +6bps and is now back up to +16bps since yesterday’s close.  Generally a lender’s pricing improves when the bond is being bought.  Yesterday the bond started out strong but lost ground over the course of the day…I called it…nailed it!  Today there is early volatility, probably because of the Fed meeting this afternoon and overseas markets.

Today the Fed Open Market Committee ends and although there is no formal statement scheduled the Fed members can be counted on to get in front of the microphone.  Whenever they do the markets could bust a move.  From what I’m reading nobody expects any blockbuster news about monetary policy but make no mistake about it…everyone will be listening to what they have to say.  I feel locking is still prudent until we see some positive momentum in bond trading to get us over the ceiling of resistance. 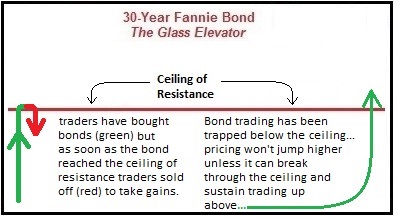