Leave a comment Posted by Phil Grossfield on December 29, 2014

Firearms & Grateful Experiences.  I’m not a big fan of guns…but I did own one for a while when I was a law student in my third-year of law school.  You see, I was assigned by a Judge to work on a first-degree murder trial in Minneapolis.  The accused, Leonard J. Richards, was being prosecuted for killing his half-sister for insurance proceeds.  And, since Richards was already serving a life sentence for murdering his tax attorney,  I had to work at the Stillwater Maximum Security Prison.  So, every week after law school I would ride my motorcycle to Stillwater and go through security to work with Richards in the visitation room.  You can imagine my trepidation to be working with a convicted murderer who just so happened to have killed his lawyer.  Anyway, that’s another story for another time.

During my visits other prisoners would enter an adjacent visitation room…there was glass in-between the sections of the large room.  Richards would point to a convict and explain what heinous crime he committed …and when I say heinous please consider the full meaning of the word. 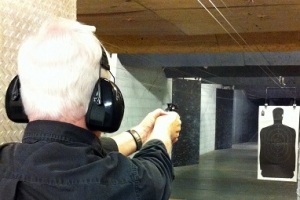 It freaked me out to be near so many hideous repulsive “people” …the things human beings are capable of is mind-boggling.  It wasn’t long before I decided to get a gun.  I bought one and signed up for a class to learn how to shoot, etc.  It was a strange time back then.  The experience changed the trajectory of my life since I had planned to be a criminal defense lawyer.  In hindsight I’m thankful since nothing I have today would likely have occurred if I had chosen that timeline.  I guess that’s the meaning of this post…to be thankful for where I am and for the experiences along the way that got me here.

The 30-year Fannie Mae bond is trading at par since Friday’s close.  Generally a lender’s pricing improves when the bond is being bought and gets worse when selling off.  Today neither is happening so you’d expect pricing to be the same as Friday’s close…and it is.

Not much is going on today and despite more economic reports tomorrow I don’t expect too much volatility unless some big news is revealed.  Simply put, there’s just not that much going on right now.  If that changes I’ll try to give you a heads-up…