Breaking Bad.  I have to admit, with my bad-ass goatee last month I felt like a bad-ass. It could also be that I watched 5 seasons of Breaking Bad in about 6 weeks.

Yes, I was instructed by a friend to watch the pilot and, well, I got hooked. Ironic since the story line revolves around the manufacturing and distribution of meth…a very addictive drug. 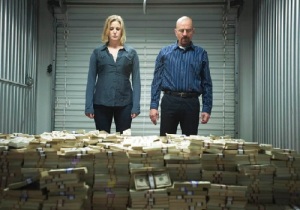 I’ve watched a lot of series over the years and I have to say this one now ranks as my favorite. The show was tight…they tied everything together and it all fit nicely. In fact, I wouldn’t be surprised to learn they wrote all 5 seasons in advance and then cut it up for dramatic effect. It’s that good. As an example of a poorly drafted series, take Lost for consideration. They hooked me in the beginning but left too many dramatic events unresolved…it pissed me off…so I stopped watching in like season 4. But not BB, this show tied everything together nicely…details carefully sewn to a dramatic and intense finale. It’s got to be a difficult thing to write a thrilling story revolving around drugs without glorifying it, develop characters that are monsters but relatable and likeable, and then tie the story together with an ending that does it all justice. I just blanking loved it.

Pricing Slightly Improved.  The 30-year Fannie Bond is trading higher after the Jobs Report came in as expected. Although these numbers are still strong, they aren’t enough to scare traders into dumping bonds, thank goodness.

Job Creation Shows Pattern Of Improved Economy…Concern Over Sooner-Than-Later QE Tapering Gains Momentum. Below is a chart that shows the number of new jobs created in 2013, compliments of MBS Highway. As you can see, new jobs have been solid and steady since August and but for July they have been solid since May. This pattern of solid new jobs growth can be interpreted to mean the economy is improving. If so, the Fed could reasonably conclude that the economy could withstand QE tapering. This is the concern of the traders, whose job is to buy low and sell high…they are hesitant to invest with QE tapering lingering. But don’t expect a tapering announcement in 2013. In fact, from what I read it makes sense that if economic growth continues through the first quarter of 2014, then the reasonable target for a QE tapering announcement is the beginning of the second quarter….  I’d love to hear your feedback….

One response to “Breaking Bad; Jobs Report Not Overly Strong”