Leave a comment Posted by Phil Grossfield on June 7, 2013 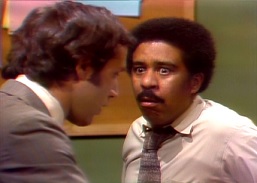 Richard Pryor – Omit The Logic. I watched this Showtime documentary on the life of Richard Pryor, one of my comedic favorites of all time. It’s a fascinating look into his genius, his dedication, and his spirit. It also reveals his weaknesses and ultimate destiny. Undoubtedly he changed comedy forever…just ask Eddie Murphy or any of the great ones to follow…. My favorite of all is the SNL skit with Pryor and Chevy Chase doing Word Association…check it out and enjoy! I highly recommend you check out the documentary too…here is a short trailer.

My Schedule: Available all day…done around 4p.

My Market Watch: Jobs Report Has Bonds Down – Prices Worse The 30-year bond is down after the Jobs Report came in pretty much as expected. Pricing is worse from yesterday by 0.250 since bonds are selling off…now down -37bps on the day…Interbank has already priced this fall into this morning’s rates.

The Jobs Report was not too far off expectations. 170,000 new jobs were expected and it came in at 175,000 new jobs…not monumental. Nevertheless, since there are more new jobs traders figure the economy is strong and therefore they sold off bonds to invest in stocks. When traders sell off bonds the price of bonds drops and lenders’ rates/pricing worsen. To counter the nominal uptick in new jobs was the unemployment rate which went up slightly from 7.5% to 7.6%. An increase in the unemployment rate means more people are claiming they don’t have jobs…a weak economic signal. But the increase was so small it had little impact.

As a result, we had an uneventful Jobs Report and Unemployment Report. But if you recall, I said yesterday that the market would react more vigorously to today’s reports because of all the volatility of late. I also said there was more downside to upside because signs of a strong economy reinforce Bernanke’s new position to taper QE. So, even though the reports this morning were far from exciting, traders still reacted to it by selling off bonds.

And so, this morning has not gone according to plan. It’s not what I was looking for – that’s for sure. I was really hoping for some upward motion in the price of bonds, but alas, my prayers were not answered in that respect. I am also confused as to why the price of bonds increased over the last few days but we did not get an improvement in pricing…very odd that completely omits the logic. However, the good news is it appears the harsh drop in bonds has leveled out. Even if we don’t get back the 400bps we lost in May we have some hope that things will not get dramatically worse. And I can assure you the Fed will not be eliminating QE any time soon. That’s what I’m taking into the weekend….

Economic News
← Everyone Pray! Jobs Report Tomorrow Do The Hustle! →